Why Should the Transfiguration Be Important to You?

Why Should the Transfiguration Be Important to You?

Have you ever considered the significance of the appearing of Moses and Elijah on the Mount of Transfiguration and what it might mean for your life? It may be obvious to some that Moses represented the giving of the Law (Torah) and Elijah represented the giving of prophets to proclaim God’s word. But actually, the meaning of their appearances goes quite a bit deeper than that.

Three times in scripture God speaks from a mountain. The first time was from Mount Sinai when God gave the Ten Commandments.

“Mount Sinai was wrapped in smoke because the Lord had descended on it in fire. The smoke of it went up like the smoke of a kiln, and the whole mountain trembled greatly. And as the sound of the trumpet grew louder and louder, Moses spoke, and God answered him in thunder. The Lord came down on Mount Sinai, to the top of the mountain. And the Lord called Moses to the top of the mountain, and Moses went up…And God spoke all these words, saying…” (Exodus 19:18-20 and 20:1).

Between the appearance on the mountain and God speaking as if through thunder, the people of God were terrified and asked that God not speak to them anymore. “You speak to us, and we will listen; but do not let God speak to us, lest we die” (Exodus 20:19).

This is an interesting contrast to the second time that God spoke on a mountain. That mountain was Horeb (same mountain, different name), and Elijah the prophet waited for the Lord to speak to him while he was in a cave. Notice what scripture says about this.

Did you notice the difference? For Moses there was thunder and an earthquake and smoke, enough to terrify the people. Yet when he spoke to Elijah, there were these things, but God did not speak through them, but rather, through a low whisper.

In both of these accounts of God speaking from a mountain one gives the Law and one anoints kings. Now, let’s look at the account of the Mount of Transfiguration.

“And after six days Jesus took with him Peter and James, and John his brother, and led them up a high mountain by themselves. And he was transfigured before them, and his face shone like the sun, and his clothes became white as light. And behold, there appeared to them Moses and Elijah, talking with him. And Peter said to Jesus, ‘Lord, it is good that we are here. If you wish, I will make three tents here, one for you and one for Moses and one for Elijah.’ He was still speaking when, behold, a bright cloud overshadowed them, and a voice from the cloud said, ‘This is my beloved Son, with whom I am well pleased; listen to him.’ When the disciples heard this, they fell on their faces and were terrified. But Jesus came and touched them, saying, ‘Rise, and have no fear.’ And when they lifted up their eyes, they saw no one but Jesus only” (Matthew 17:1-8).

In this case, Jesus did not go up alone as Moses and Elijah did. Jesus’ closest disciples were with him. Instead of fire and smoke there was bright light. In Exodus, God’s voice thundered. In I Kings God spoke in a whisper. God also spoke in thunder to the disciples, but also in a normal voice when Jesus said, “Rise, and have no fear.” But the real significance is not that Moses and Elijah appeared, it is in what they represent.  For, we must remember that Jesus is the God of the Old Testament. It was his voice that Moses and the congregation heard on Mount Sinai. And it was his voice that Elijah heard outside the cave. Thus, the two men appearing before Jesus during his incarnation are signposts, pointers, representing these truths:

The authority of the Law and the proclamation of prophecy begin and end with Jesus. The Father signifies this when he loudly pronounces, “This is my beloved Son…listen to him!” And beautifully, the first words Jesus speaks after this proclamation are, “Rise, and have no fear.”

What is the Lord doing in your life, right now? Are you fearful of God speaking and changing your life? Are you listening to Jesus? Whatever the Holy Spirit may be convicting you of through the Scripture, God’s word to you is the same as Jesus, “Rise, and have no fear.” In Exodus and I Kings, Moses and Elijah went down the mountain alone. But at the Mount of Transfiguration, Peter, John, and James walked down the mountain with Jesus. God is not just a thundering voice or one who commands from afar. In Jesus we are with him, through the presence of his Holy Spirit. So, in this case, we have nothing to fear beyond the reverential fear that is due him. You can submit to him knowing that his word to you is true (Law), and that his calling on your life is sure (Elijah). You can submit to his authority, because he possesses it whether you obey or not, and he much prefers to walk with you down the mountain. 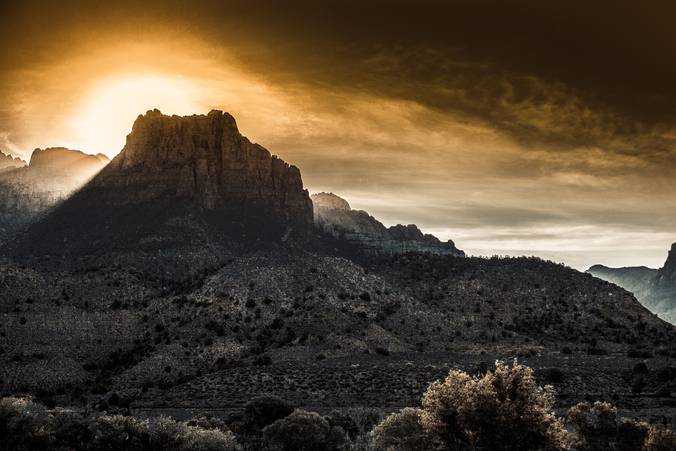