My mom passed away a few months ago. Can she hear me in heaven when I talk to her?

No one can answer your question with any degree of certainty. As far as I know, the Bible never gives a definitive answer.

Nevertheless, the Bible does give some insight into the matter. In Revelation 6:9-11, a group of Christian martyrs are pictured under the altar in Heaven watching death blows rain down upon Christians who are alive on earth during the Great Tribulation. These men and women are obviously aware of the events on earth and are pleading for God to get even with the persecution perpetrators.

Acts 7 records the stoning of Stephen for the “crime” of preaching the Gospel. He was the first Christian martyr. Just before dying he saw Jesus leaning over the ramparts of Heaven looking on him with compassion and concern: “When they heard this, they were furious and gnashed their teeth at him. But Stephen, full of the Holy Spirit, looked up to heaven and saw the glory of God, and Jesus standing at the right hand of God. ‘Look,’ he said, ‘I see heaven open and the Son of Man standing at the right hand of God.’ At this they covered their ears and, yelling at the top of their voices, they all rushed at him, dragged him out of the city and began to stone him” (Acts 7:54-58).

In Matthew 17, Moses and Elijah clearly already knew the events going on when they appeared with Jesus on the mount of transfiguration. In Luke 15 Jesus speaks of rejoicing in the presence of the angels, not BY the angels but in their presence, whenever a sinner repents, suggesting God’s people in heaven rejoice at God’s work in lives on earth. To rejoice at it, they obviously must be aware of it.

Some view Hebrews 12:1-2 as evidence that Christians in Heaven can observe activities occurring on earth. The Heroes of Faith are pictured in Hebrews 11 as standing in a great stadium as they cheer for Christians who are running the “race that is set before them.” I don’t particularly agree with this interpretation. I think that the writer to the Hebrews was simply using them as encouraging examples to us that our faith can result in victorious living, too!

On the other hand, Julie and I listened with rapt attention as one of our missionary friends from the Middle East described the raid on her family by the secret police of a nation that often persecuted Christians. Her skull was split open by an axe. Her husband was beaten mercilessly. God miraculously protected their children. She was air evacuated to Vienna and miraculously survived with all her mental and motor skills intact! Her husband fully recovered. She wept as she described the horror of the attack; however, moments later her lips curled up in a soft smile as she told of the vision she had during the attack of the saints of Hebrews 11 cheering her on in her pain.

While these examples might hint at your mother being to hear (and see) you on earth, they are certainly not definitive. My opinion is that—I just don’t know the answer. But, maybe the following story can put things in perspective.

When our baby daughter, Jessie, died in our arms, Julie and I said, “Good bye,” and then knelt to pray. I remember asking God to tell Jessie that we were her mommy and daddy and that we loved her more than words could tell. I asked God to relate to her how glad we were that she finally had a working body with which to enjoy the delights of Heaven. I prayed for God to tell her that we were looking forward to seeing her again soon!

At her funeral I prayed for Jesus to tell Jessie that we really wished she were still here on earth us, but that we did not begrudge her one bit the great time she was having in Heaven.

Brian, I find myself still quietly praying those prayers still today—thirty-eight-years later. I don’t know if Jessie can observe or hear from me directly; on the other hand, I know that God can, and that makes me confident that Jessie knows as well. Ask God in prayer to tell your mom whatever you want to tell her. It just may be that God passes the message along.

Thanks for the question. I hope my thoughts are helpful. 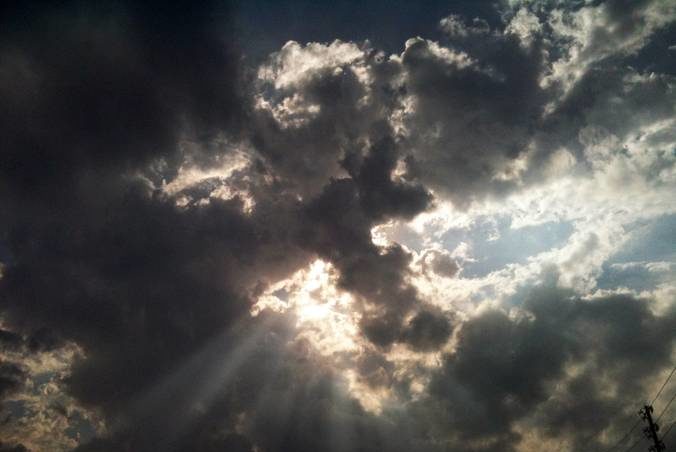