Can a Real Christian Get Angry?

Can a Real Christian Get Angry?


I really struggle with anger. It seems like I just can’t keep it under control. I know it’s not Christian to be angry, so what advice would you give me?


Like you, many people do wonder: “Is it a sin to be angry?” Of course not. Anger is a necessary, built-in emotion. (Proverbs 27:4; 14:17; Ephesians 4:26-27). The emotion of anger is not sin; but, anger has the potential to lead into sin. Anger does not become sin until we translate it into aggressive and hostile actions—or activities destructive to ourselves.


However, anger has its limits. Out of control anger can be a dastardly thing. One of my favorite proverbs is Proverb 29:11: “A fool gives full vent to his anger, but a wise man keeps himself under control.”


Why do people get angry? You know the answer to that. People get angry for all sorts of reasons. Some are angry because of the injustices done to themselves or to others. Some are angry for righteousness sake. Hurt someone and they will get angry (Proverbs 20:2). Anger is the natural response to being hurt. Some are stymied and kept from doing something they intend to do. Some have been embarrassed by others. Others feel cheated. The loss of a loved one can trigger intense anger. Occasionally a small squabble can become an angery encounter. The list goes on and on.


On somewhat of a deeper level, some get easily and overly angry because of imbalanced brain chemistry. Some have opened their lives to a demonic stronghold (Ephesians 4:26-27).


Uncannily, many people don’t realize when they are angry. According to Dwight L. Carlson, M.D. the following are misconceptions about anger:

2. If I ignore my hurts and anger, they will go away and won’t cause me any trouble later on.

3. If I just let all my feelings and anger out—just get them out of my system—I’ll solve my anger problems.

4. It won’t cost me too much emotionally to be a nice person who never gets angry at anybody.

5. If I express my hurts and anger to the person with whom I’m angry, our relationship will suffer.


Very often, we tend to express our anger in two ways: we blow up and vent our anger (Proverbs 29:11), or we internalize it by “clamming up.” The first century Greeks recognized these two polar opposites.


“Orge” describes a fire that quickly flashes up and dies down just as quickly. Like when an open flame is touched to a pile of extremely dry sticks and leaves. It burns furiously and just as quickly burns itself out. Some angry people explode and often hurt those around them–but they sure feel better.


On the other hand, the Greek word “thumos” describes a ripe peach still hanging on the tree that keeps getting riper and riper until it turns to mush and falls on the ground for some unsuspecting person to step in. “Thumos” people internalize anger and refuse to face it for what it is. Eventually, however, their anger will likely ooz out and sabotage relationships with the people around them–as well as their own emotional well being.


In his dynamic work, The Angry Book, Dr. Theodore Isaac Rubin, M.D., illustrates describes what “orge” and “thumos” might look like.


Now, let’s come to the crux of the matter. What do I do when I feel myself becoming angry? (Proverbs 16:32)


1. Deescalate the emotions of the moment. Choose to calm yourself down. (Proverbs 30:33; 15:1). Take time to read and apply Psalm 131. Counting to 100 is still a most effective way of quieting yourself down before doing something stupid.

2. Quickly decide whether the anger is worth it and back away if it is not. I was a happy third grader on the play ground when a big-fourth grader challenged me to a fight.

“I heard that you said that you can beat me in a fight. Do you want to try,” he asked?” My first thought was, “I never said that.” My second thought was that it wasn’t worth the fight. I said, “O.K. you win. You are better than me.” He screwed up his face and looked at me: “Well then, don’t you forget it.” Some situations just aren’t worth it.

3. Ask the question, “where have I been hurt?” Most people get angry they’ve been hurt by someone, something or some situation. (Proverbs 19:11). What hurt is producing you anger? Heal the hurt and you will begin to heal the hurt Matthew 5:4).

4. Follow Jesus’ anger-healing model as revealed during His crucifixion experience (This model is adapted from “Jesus Healing Model by David Ferguson of Intimate Life Ministries.)

First, He mourned His hurt (Matthew 26:38) and received comfort (Matthew 5:4) from the angels.

“He took Peter and the two sons of Zebedee along with him, and he began to be sorrowful and troubled. Then he said to them, “My soul is overwhelmed with sorrow to the point of death. Stay here and keep watch with me” (Matthew 26:37-38).


Second, He understood the truth of what was happening: “Father, forgive them, for they do not know what they are doing” “(Luke 23:34).


I hope this helps. We need to feel the emotion of anger to be healthy, as long as we express it in a godly way. 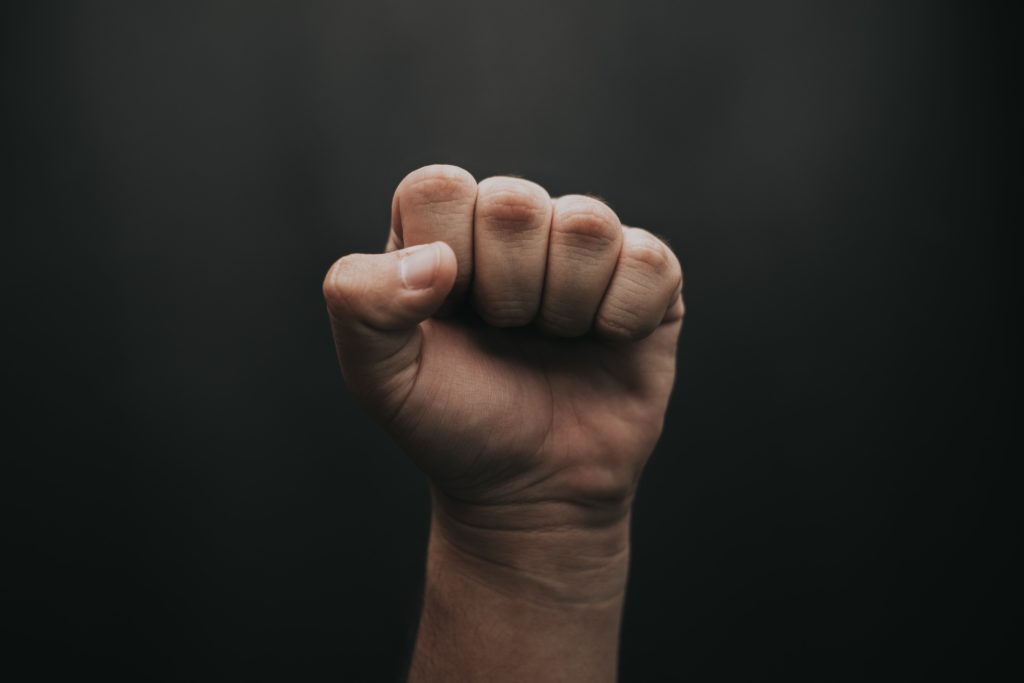