What You Didn’t Know about Noah’s Ark

What You Didn’t Know about Noah’s Ark

What is Noah’s Ark? The Ark of Noah is at the very heart of this story. Therefore, it is the Ark that becomes God’s prophetic message to future humanity. At times people have thrown a bottle containing a message, into the sea, and years later it is found and the message contained within it is read. This is the picture I have for the Ark of Noah: the prophetic message is inside this story, and it is our task to ‘unseal’ it in order to understand the message. Noah himself probably did not realize the prophetic meaning of his own story (just as people who throw a bottle into the sea don’t know when and by whom it will be found) – but God definitely did know: He threw this sealed Ark into the waves, for us to unseal and to read. Today, as we open this ancient message, what do we find there?

First of all, who was Noah? Who was this man who was chosen to give a new beginning to the whole of humanity? Why was he chosen? Scripture tells us that Noah found grace in the eyes of the Lord.[1] Since we are dealing here with the last level of PARDES – sod, secret, mystery – we have to ask: what does it have to do with Noah? What is the secret of him finding grace in the eyes of the Lord?

After everything we’ve discussed here already, the very first, and most obvious, suggestion would concern Noah’s bloodline. Various commentators assume that the expression “perfect in his generations”[2]  might be read, and even should be read, in the sense of his perfect bloodline : Noah was perfect in his genealogy.  His bloodline was pure, in that it was totally human, and that was the first and most obvious reason why God chose him.

We have to remember though, that the God of the Bible is first of all God of the hearts. That is why I have no doubt that Noah’s heart was also pure and that he indeed, was righteous before God. Scripture tells us very clearly that Noah ‘walked with God’[3] (by the way, there are only two people in the whole Bible that are described in this way: Enoch and Noah). Yes, Noah had a pure bloodline, but he was also righteous before God; in fact, these two things are connected and go together: Noah’s bloodline remained uncorrupted because he was righteous. He was completely separated from the sinful world and sinful people (and half-people) around him – and that’s why he was perfect in his generations. Do you know that in Hebrew the word kadosh, holy, also means “separated”: the words “at mekudeshet lee”, pronounced by the groom to the bride in the Jewish wedding ceremony under the chuppah, simultaneously mean “you are separated to me” and “you are holy to me.”  This is exactly what God would later expect and require from His people: to be holy, and to be separated from the sin of this world.  Noah, with his pure heart, was separated from the corrupted world and therefore passed on a pure human bloodline, not corrupted by the demonic seed. Thus, Noah was a perfect candidate for God’s plan.

However, that is only part of the message that God is sending to us through this story.  The central point of the story of the Flood – God remembered Noah[4] – reminds us that this message is not only about man, but also about God. So, what is the second part of the mystery that God wants us to see in this story?

We will find the second clue in the Ark itself. You might remember that, when God instructed Noah how to build the ark, He commanded him to pitch it within and without with pitch[5]. In English, it sounds like a mere technical description, and you may never have given much thought to this verse. However, when we read in Hebrew, we discover here the root???  (kafar: kaf- pei-reish) : vehafarta ota mibait umihutz  bekofer. You are probably familiar with Yom Kippur – this is the same root that we have in the word “Kippur”. Yom Kippur means the Day of Atonement, therefore the meaning of this verb has to be: “to atone”. We know, however, that Yom Kippur, as well as the whole concept of atonement, will only be introduced much later. Why then, would this verb be used here, in the story of Noah? We don’t find the word “atonement,” or anything pertaining to atonement, in our translated texts, whatever language we read. So what’s going on here? Why does this amazing root word occur here in the Hebrew text – and why then does it disappear in translation? This word is too significant, too deep, too important for all its future redemptive meanings, and therefore can’t be ignored.

This is a beautiful example of how deep and multifaceted the Hebrew language is. Turn with me to a dictionary, and you will be overwhelmed (as I was, and have been ever since) by the incredible depth of His word. Since Hebrew is a root language, most of the words are formed from a three-consonant root by changing vowels and by adding different prefixes and suffixes. Thus, we find in the dictionary two verbs from the same root, with two completely different meanings:

(kafar)  – to pitch something with pitch; and

Can you imagine? This very technical command – you shall pitch it within and without with pitch – in Hebrew, this sounds almost like a theological statement.  We all know of course, that the Flood and the Ark are great symbols of punishment of the wicked and salvation of the righteous; however, without Hebrew, we completely lose something that is obvious in the original text: even phonetically, the story of Noah is the story of redemption and atonement, the word “to atone” being actually built into the original text!

Do you see what is going on here? The language of Torah is given by God, and therefore it is different from any other human language: the meanings that are yet to come are shown here through the regular meanings of the words. More often than not, the words of Torah are pregnant with these future meanings – with something that is yet to come, that was not seen by man, but was installed there by God. Here we find the Sod, the Secret that God wants us to see in the story of Noah: Yes, a man has to be separated from the corrupted world and to walk with God – and yet, even those within the ark of Noah were not ‘perfect’ and still needed to be “pitched” by God:  within and without.  From inside and from outside. 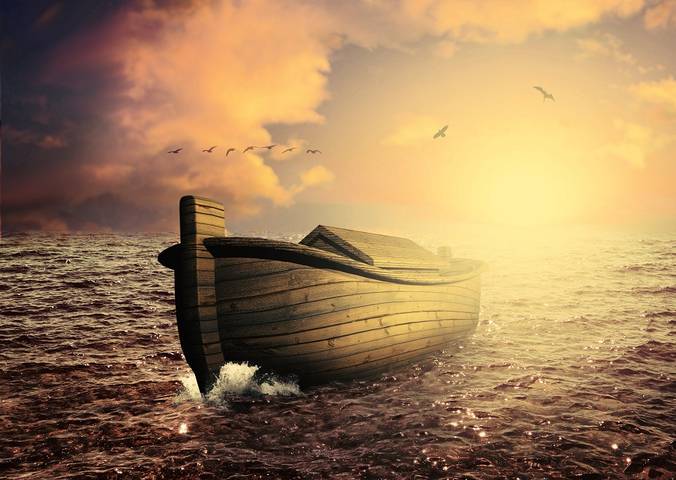